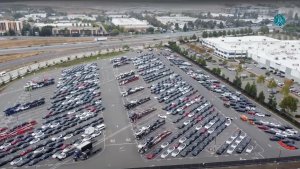 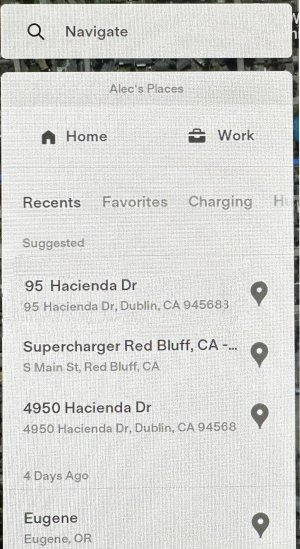 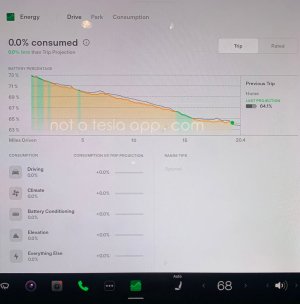 Detailed look at the new Energy App in update 2022.36 (updated with more images and video)

Tesla is pushing FSD Beta automatically to owners who qualify 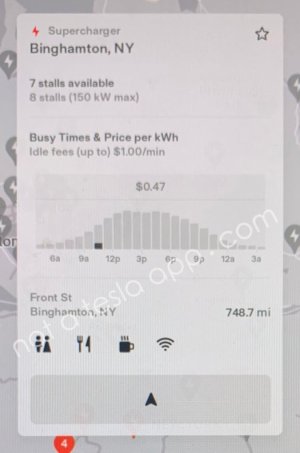 A closer look at Tesla's new Supercharger popup in update 2022.36 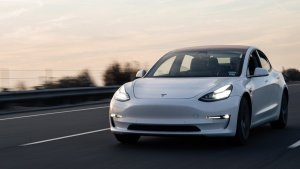 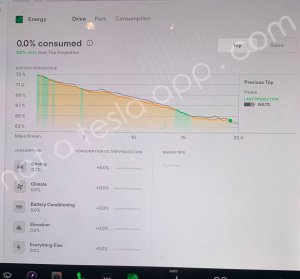 Improvements expected in FSD Beta 10.69.3 according to Elon 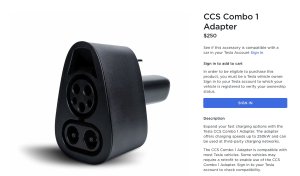 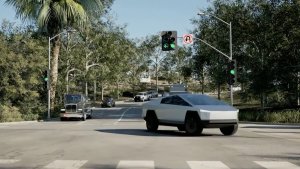 This is an early look at this update's release notes. There could be other features included that are not shown below.

Learn more about your vehicle's energy consumption with the updated Energy app. You can now:

- Monitor the amount of energy used while driving and parked.

- See how much energy is consumed by different vehicle components, driving behaviors, and environmental conditions.

- View energy used in comparison to trip projection and the battery indicator.

The redesigned Supercharger map popup will now display historical site occupancy in addition to the associated charging fees when available. To view these details, tap on any Supercharger pin that is in the vicinity of your vehicle.

Car Left Open Notifications will now notify you when the doors have been accidentally left unlocked.

You can now select Lithuanian as your touchscreen language. To update your language settings, tap Controls > Display and select your preferred language from the Touchscreen Language' drop- down menu.

View up to three routes when navigating to a destination. Quickly compare the total travel time and traffic information for each route.

Note: Traffic information is only displayed with Premium Connectivity.

Editor's note: Tesla is rolling out Alternate Routes selectively. The feature is enabled by Tesla remotely and not all vehicles will receive it at the same time. Tesla appears to be gathering feedback before rolling out the feature to everyone.

Who's receiving it and why

A status bar with select quick controls has been added to the top of the touchscreen map.

Jump into the original Sonic the Hedgehog! Use the supersonic spin attack or defy gravity to defeat Dr. Eggman as the fastest hedgehog of all time. To access Sonic in PARK, tap the Application Launcher > Arcade. A game controller plugged into the glovebox USB port is required.

Leap into a grand adventure of dragons, magic and cats to pursue the evil Drakoth and your catnapped sister. To access Cat Quest in PARK, tap the Application Launcher > Arcade. A game controller plugged into the glovebox USB port is required.

Traverse strange worlds with new weapons and powerful super moves to repay your debt to the Devil with this classic run-and-gun action game. To access Cuphead in PARK, tap the Application Launcher > Arcade. A game controller plugged into the glovebox USB port is required.

Note: To use Smart Summon in this region, please stand within six meters of the vehicle.

The radio icon has also been updated to be more ambiguous with this update. The traditional analog radio markers have been flipped so that they now run vertically instead of horizontally.

The letters 'FM' have also been replaced with a generic circular icon so that it's more inclusive of other supported bands such as DAB, which is supported in many parts of the world.

The HomeLink buttons have once again been relabeled. When pulling up to your garage door, the buttons will once again be labeled with the name you've given your garage doors (top photo). However, if you have auto-open or auto-close enabled, then you will see the 'Cancel' text inside of the button for the specific door that will be opened or closed. The rest of the buttons will still show their given labels (bottom photo).

The vehicle options under Controls > Safety have been slightly rearranged. Sentry Mode, PIN to Drive and Glovebox PIN have moved up. This allows you to quickly enable or disable them without needing to scroll.

The dark mode color scheme has been adjusted so that various screens now use lighter gray tones. For example, prior to this update the car visualization and apps like the media player both used the same dark gray color for the background.

However, with this update Tesla has changed the background color of apps from a dark gray to a much lighter gray so that they stand out from the vehicle visualizations.

With this update Tesla introduces the ability to minimize Tesla Theater, allowing you to access vehicle menus and settings without leaving your streaming video.

Previously while streaming video in full screen, there was a quick access bar at the top of the video that could be revealed by tapping near the top of the screen. This status bar lets you access some vehicle controls without leaving the video. Video controls such as cabin temperature, screen brightness and volume could easily be changed.

Since you can now minimize a full-screen video without leaving the video app, Tesla has mostly removed the options that once appeared at the top of a video.

When tapping near the top of the screen, the number of options has been reduced to minimize theater, a back button and the state of charge of your battery.

A gray line has also been added to the top of the screen to let you know that you can now swipe down on the full-screen video to access other car functions.

When you're on a call in the vehicle, the green phone icon will now always remain visible in the status bar, regardless if the phone card is hidden or not. The icon in the status bar has also changed shape slightly, going from a pill shape to a square.

Photo by Corey2002 in the Not a Tesla App forums.

Some vehicle alerts will now contain an arrow that could be tapped for additional information.

Tapping the arrow will open the vehicle's manual to the appropriate section and display additional details regarding the alert.

Your vehicle will now display 'Calibrating,' when charging is nearing completion. This will be displayed for all vehicles, regardless of their battery type.

This is an early look at update 2022.28 and does not include all features in this release.

Your vehicle is now running Tesla Vision! It will rely on camera vision coupled with neural net processing to deliver certain Autopilot and active safety features. Vehicles using Tesla Vision have received top safety ratings, and fleet data shows that it provides overall enhanced safety for our customers. Note that, with Tesla Vision, available following distance settings are from 2-7 and Autosteer top speed is 85 mph (140 km/h).

Editor's note: This feature applies only to select vehicles. It will also only show up under the 2022.20 release notes and not the 2022.24 release notes that are shown after installation of the update.

To see whether it applies for your vehicle you can view the 2022.20 release notes by navigating to Controls > Software > Release Notes.

Find out if your car was transitioned

Adjust the placement of your blind spot camera on your display by dragging the camera feed. The camera feed will appear in the same position when your blinker is active. To enable, tap Controls > Autopilot > Automatic Blind Spot Camera.

Keep your settings and preferences synchronized across all supported vehicles using your Tesla account, including:

You can set up your Tesla Profile from Driver Profile settings and change your profile picture from the Tesla Mobile app.

Any slow traffic conditions along your navigation route are now shown prominently as part of the route line on the map Note: This feature requires Premium Connectivity.

Everything included with Premium Connectivity

To prevent disturbing neighbors, you can now disable the sounds made by Sentry Mode. Mobile app notifications will still be delivered. To enable this setting on the touchscreen, tap Controls > Safety > Sentry Mode > Disable Sentry Sounds.

Any navigation recents or favorites will now be saved to the active driver profile.

Rear climate controls can now be set to Auto. Tap on the climate icon > Auto on the rear screen, or Rear > Auto on the center display climate popup. When Auto mode is enabled, the fan speeds will adjust automatically in order to reach the desired temperature.

Your vehicle can now automatically apply regular brakes for consistent deceleration when regenerative braking is limited due to battery temperature or state of charge. To enable, tap Controls > Pedals & Steering > Apply Brakes When Regenerative Braking Is Limited.

When the vehicle's navigation is active and the maps are covered with another application, the next step in the directions will now be shown at the top left corner of the screen, instead of the bottom left corner.

Since tire pressure data is only sent while wheels are in motion, the Service section under Controls will now display the last known tire pressure for each wheel.

At the top of the screen the recommended cold tire pressure will also be displayed for the front and rear wheels.

You can now uninstall individual games, freeing up space on the vehicle's internal drive. In addition to uninstalling games, you can also view the size of each game and which drive they're installed on.

In order to create additional room for the Blind Spot Camera, the vehicle's turn signals have moved up to the top of the screen. They're now located above the regeneration/acceleration line and will appear between the gear indicator and battery icon.